Alexei with his very apt students.

ONE OF MY fondest times in Moscow was Tuesdays spent with Alexei. He was the teacher who taught us lacquer box painting.

For two hours every Tuesday, the five of us who lived within the same building would converge at Julia’s home for the class, bringing our little ones along and some snacks for after-class tea time.

By the time the class ended after seven sessions, we had enough boxes (and confidence) to display our crafts in an in-house exhibition.

In total I completed 12 boxes, gave one away, and have several blank ones still sitting in the storeroom waiting to be painted, along with my Tempera paints which are probably all dried up today.

My first box complete with my name in Russian.

My second box was presented to a friend who collects boxes when she visited Moscow in 2007; hubby eventually spotted that box on display in Universiti Malaya, along with her large collection of boxes collected throughout her diplomatic career (5 April 2011).

Two boxes, each featuring a firebird and a dragon, mythical creatures in the Russian and Chinese folklores respectively. 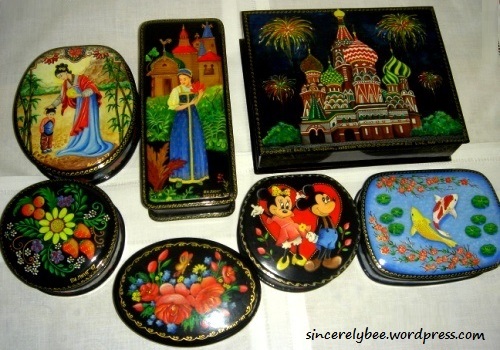 Part of my collection of self-painted lacquer boxes.