I ADMIT – I am obsessed with snow! Only because I’ve been blessed with so many warm memories of the cold stuff 🙂

And when it snows in DC, it is something to be rejoiced (for me, that is; but certainly not for the authorities who had to deal with the inconveniences). After all, snow is not a common occurrence (as in Russia). During the three years we were there, I read that it was a constant concern every December if Washingtonians were getting a white Christmas.

On 25th January 2000 when a sudden snowstorm blew over Washington DC, a winter storm warning was issued. It snowed throughout the day and by evening gusty wind had dumped between 8”-20” of snow in the Washington DC area and its vicinity. Federal holiday was declared earlier, shutting down schools and offices for the day as well as the next day.

Coincidentally, hubby had taken the day off to accompany me to my gynae visit, which was inevitably postponed. We ended up being imprisoned in our little apartment. The next morning, we woke up to a huge pile of ankle-deep snow on our balcony. We took the opportunity to venture into the city centre which was blanketed in snow!

These pictures were taken on 26th January 2000. 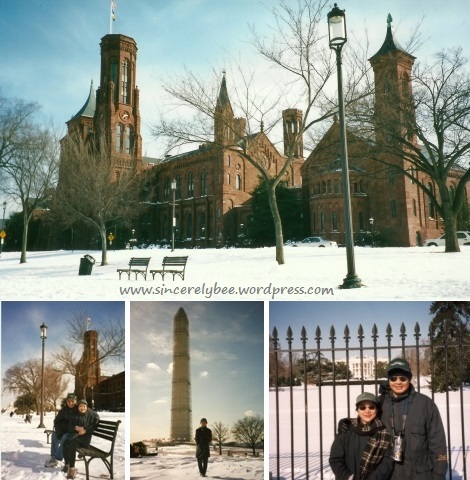 The year before, we experienced a similar snowstorm on 9th March 1999. And like a crab taking to the low tide, I was drawn out of the comfort of my apartment to the city in search of pretty snow pictures.

My two-hour lone walk in the city on 10th March 1999 was certainly not in vain.

The White House lived up to its name that day!

The Washington Monument on one end of the National Mall.

Around Capitol Hill where I came across News Channel 8 reporter Matt Brock and his cameraman on assignment.