Little J dropped by for a visit the following year. (6 October 2011)

EVERY MAY, MACAU holds an arts festival that brings a series of cultural activities to showcase and promote both local and foreign talents in theatre, dance, music and arts.

We had the opportunity to attend the 21st Macau Arts Festival on 28th May 2010. That year, our trip included a visit to the Macau Museum to view the exhibition of “Traveller’s Home: Master Works by George Chinnery”. Chinnery was a British painter who made Macau his base in 1825 until his death in 1852. 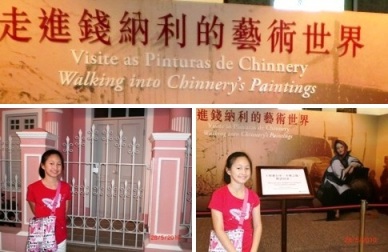 In Macau Museum for the exhibition of “Traveller’s Home: Master Works by George Chinnery”.

We also visited Mandarin’s House, the ancestral home of prominent Chinese literary figure Zheng Guanying and his descendents. It is believed to have been built before the year 1869 (at least 141 years old at the time of our visit). At 4,000 sqm, it is said to be the largest private residence in Macau. Over time, lack of conservation and maintenance and even fire were said to have caused significant damage to the property. In 2001, the Macao government got proprietorship of the residence and began restoration works. (Source: http://www.wh.mo/mandarinhouse/en/)

Today, Mandarin’s House is included in the UNESCO World Heritage list that makes up Historic Centre of Macau.

At the Mandarin’s House, we were led through its Moon Gate, walked a longish path called the Sedan Way, towards the Ronglu Hallway. We toured the interior of the two-storey building, and its exterior, including the main garden and front courtyard. It was pointed out that the entrances of the house in the compound all face the northeast. Our attention was also directed to the home’s decorative motifs, predominantly Chinese in style infused with western influences.

After dinner, we headed to Macau Cultural Centre’s Grand Auditorium where we were dazzled by Ballet Rakatan, a two-hour performance of jazz, mambo, bolero, cha-cha, rumba and salsa lively dance and music that showcased Cuban culture and passion. This Sadler’s Wells & Congas Productions won the Five Stars Award for its performance at the Edinburgh Festival in 2006.

The annual Macau Arts Festival is organised by the Cultural Affairs Bureau of the Macau SAR Government.

The year before, we also managed to catch part of the programme of the 20th Macau Arts Festival on 3rd May 2009. We saw the artworks of two artists at their studios.

That evening we caught an opera by Macau-born composer Lam Bun-Ching at the Dom Pedro V Theatre. Titled “Wenji: Eighteen Songs of a Nomad Flute”, this contemporary chamber opera (written to be performed with a chamber ensemble rather than a full orchestra) which incorporated traditional Chinese opera with western music, is based on a true story of a poet/musician Cai Wenji from the Han Dynasty.

AFTER OUR FIRST trip to Apothecary Garden two weeks earlier, we returned here on 20th May 2007, this time with another group of friends.

We were greeted by a wonderful sea of colours from the flowers in full bloom. There were pretty flower beds at every turn, making it a paradise for shutterbugs.

It was indeed a floral feast to the eyes. Tulips were dominant among the many types of flowers. We had our “Kodak moment” and I even found my favourite “flower M” popping up among the other varieties.

I HAD THE opportunity to meet and interview the first Muslim astronaut – Prince Sultan Salman bin Abdul Aziz Al-Saud – twenty years ago in 1993.

It was the first visit to Malaysia for Prince Sultan who in 1985 became the first Arab, the first Muslim and the first royalty in space. A nephew of then King Fahd of Saudi Arabia (1982-2005), Prince Sultan was one of the seven crew members aboard American space shuttle Discovery to launch three communication satellites, including one for the Arab Satellite Communications organisation. He also carried out a series of in-cabin experiments designed by Saudi scientists.

Prince Sultan after the interview with members of the media (which included Lokman Hamidi of TV3 and Juhaidi Yean Abdullah of NST) on 10th May 1993 in Shangri-La Hotel, KL.

The following article was published on this date in 1993.

Kuala Lumpur: Visiting Malaysia was as much an experience to be treasured as travelling to space for Prince Sultan Salman bin Abdul Aziz of Saudi  Arabia.

The 37-year old nephew of King Fahd made history by being the first Arab and Muslim astronaut when he blasted off with six other US and French crewmen in the American space shuttle Discovery on June 17, 1985.

He circled the earth 111 times during the 4.67 million km journey at an approximate altitude of 365 km.

“It was one of the most breathtaking experiences of my life,” he had said upon landing a week later.

However during his recent three-day visit to Malaysia, he had another experience just as strange and memorable to him – his first walk in a jungle escorted by his host, Education Minister Datuk Amar Dr Sulaiman Daud.

A visit to the Penan settlements further convinced him of the Government’s sincere efforts in providing medical and educational facilities – the basic needs of life – to the indigenous people.

“My interest in the rainforest issue is purely the interest of a human being, not for fanatical or political reasons,” he said.

He said he had also heard the speeches by Prime Minister Datuk Seri Dr Mahathir Mohamad at the Rio Summit. Wanting to know the issue first hand without relying on reports which “are not all the time accurate”, he even took a two-hour walk in the jungles, enjoying every minute of it.

“Coming from the desert, this experience was very unusual and educational for me.”

On his first visit to the country, Prince Sultan said there was much to learn from Malaysia.

“We have much in common. Besides both countries enjoying good relations, we share the same perspectives and goals in terms of human development.

“The country has made great strides in combining the development of the nation and preservation of the nature while keeping up with the culture and beliefs,” Prince Sultan said.

A person with vast interests including aviation, sports, architecture and ecology, Prince Sultan said he got involved in the space programme by chance, just as many of the other astronauts he spoke to did.

The Mass Communication graduate from Denver   University, United States was selected because he was a qualified pilot, spoke fluent English and was in good health.

Recalling his six months of intensive training compared to the normal one-year stint, he said it was full of hard work keeping up with the rest of the crew.

“Being a prince didn’t make me any different, so you can’t be any less qualified or less prepared than the others.”

“It was made more difficult the fact that training was done during the fasting month and I had wanted to carry out the religious practices of Islam even though I was considered a musaffir,” he said. While in space, he prayed regularly and read the Quran. After the seven days in space, he was hooked.

Speaking enthusiastically, he said, “I couldn’t believe how small the world is… much smaller than you think. So when you do some damage to it, the damage is bigger and greater than you think.”

He is currently involved in many space projects. The prince’s space flight had been described as being symbolic to a scientific re-awakening for the Arabs who once were pioneers of scientific research and intellectual advancement.

“The most important result of the whole trip is being able to let our people see the space experienced by one of our own people,” he stressed.

For that reason, he had made copies of the tape of the space flight and has given more than 300 lectures worldwide on space travel and technology.

Born and raised in his native Riyadh, he is married to the daughter of the Saudi Foreign Minister and has a four-year old son. His father is Riyadh’s Governor.

A pilot by profession, he is a Lt. Col with the Royal Saudi Air Force.

“It is an honour to be a prince. However it is also a duty which makes us more responsible and work harder to provide services to help the others,” Prince Sultan said.

Left: My article in The Star, 20th May 1993, page 19; Right: HRH Prince Sultan Salman bin Abdul Aziz of Saudi Arabia in the “Aramco World Magazine: Arabs and the Stars”, which he personally autographed. The caption below the picture quoted him: “It was one of the most breathtaking experiences of my life”.

SPEAKING OF TEACHERS, I met 2003 Tokoh Guru recipient Puan Sri Aisha Shamsuddin sometime in that same year. I had attended a course in INTAN and she was present at the closing ceremony, in her capacity as a committee member of PUSPANITA.

It then dawned on me that she was the same person who was guest of honour at my school Prefects’ Installation way back in 1986! She was then the Penolong Pengarah Pelajaran, Wilayah Persekutuan.

A year later, I saw her again when she attended the Majlis Tertinggi PUSPANITA Kebangsaan meeting hosted by WP on 24th May 2004. 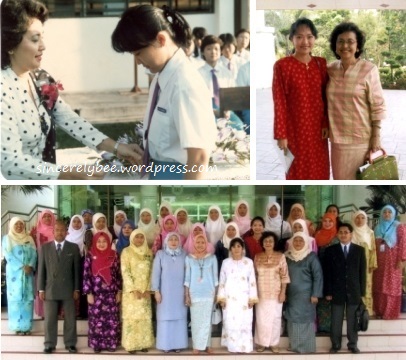