THREE YEARS AGO in June, we travelled to Nanning, Pingxiang, Qinzhou, Beihai and Guilin, in the Guangxi Province of China. It was a trip specifically organised for a small group of ASEAN representatives, to promote Nanning as a gateway between China-ASEAN countries.

We had a pretty good trip although it rained quite a bit, off and on. Throughout the 5-day trip, we visited expo sites and industrial zones; met with local provincial or municipal government leaders (ie. vice-governor, mayor, and many deputy directors of numerous departments) where we were briefed on the progress and development of their cities.

Our journey began with our flight from Hong Kong to Nanning on 23rd June 2010. Upon arrival in the evening, we checked into Red Forest Hotel  (RMB440 a night).

The next day, we left for Pingxiang city (a 3-hour bus journey) to visit the Friendship Pass. It literally borders Vietnam by road and is therefore an important gateway between the two countries.

According to information online, the Friendship Pass was one of the nine important passes in ancient China, and used to be called Zhennan (South Pacification) Pass. It was here the army of the Qing Dynasty won a great victory in the Sino-French War when the French army launched a failed attack on China in 1883-85 over Vietnam. To show friendship and good neighbourliness, the name of the pass was changed to South Befriending Pass and subsequently to Friendship Pass. (Source: www.chinahotel.com.cn)

Within the vicinity, there is a Friendship Pass Tower said to be built during the Han Dynasty and has over 2000 years of history. The four-storey building has an exhibition hall on the second floor, displaying pictures and objects that recorded the events which took place since the Zhennan Pass Victory in the Sino-French War; the third floor was the meeting hall for Sino-Vietnam diplomatic activities. The fourth floor exhibits pictures of the nine famous passes in China.

(L) A group photo, the Friendship Pass Tower in the background; (R) Standing side by side but nations apart – me on Vietnam soil while hubby on Chinese soil.

(L) Another group photo, this time at the marker stone on the Chinese side put up in 2001; (R) Crossed over to the Vietnamese side for another pix.

A colonial-styled building within the Friendship Pass area.

Next we visited the Wantong Logistic Bonded Zone and Puzhai border market.

Sceneries along the journey from Pingxiang city back to Nanning city.

Toll booths along the journey; the young ladies manning the booths were very friendly.

At night we were at the International Convention Center, Liyuan Resort, Nanning, for a meeting with Guangxi leaders, followed by a banquet.

(L) Nanning Bridge, near Liyuan Resort; (R) The Meeting Hall at the International Convention Center, Liyuan Resort where we met some Guangxi leaders.

The next morning, we checked out of the hotel and left for Guangxi Modern Agricultural Science & Technology Demonstration Zone, which was a half hour’s drive from the hotel. It was an “agriculture sightseeing” of sort here as we witnessed high-tech scientific research and techniques that led to impressive fruits of labour and bountiful harvest.

This agriculture park is popular with visiting dignitaries. Its pamphlet showed there had been numerous visits by government leaders (including Chinese President Hu Jintao) and officials from various nations. (see pamphlet on the right)

Hydroponics is employed as one of the techniques to grow vegetables; Comm Lu explains while the rest listen intently.

A seedlings-planting machine at work; then-Minister of Plantation Industries and Commodities Tan Sri Bernard Dompok was also here before (pix extracted from pamphlet).

We proceeded to visit the Nanning International Convention Center (NICC) that is promoted as a venue that caters to all types of exhibitions and events. An eye-catching feature is the roof of the multifunction hall that is a large blooming hibiscus-shaped dome. At the time of our visit, there was an Education Fair going on.

From Nanning, we left for Qinzhou city, which is about 1.5 hour’s journey. There we visited Qinzhou Bonded Zone and Qinzhou Port. 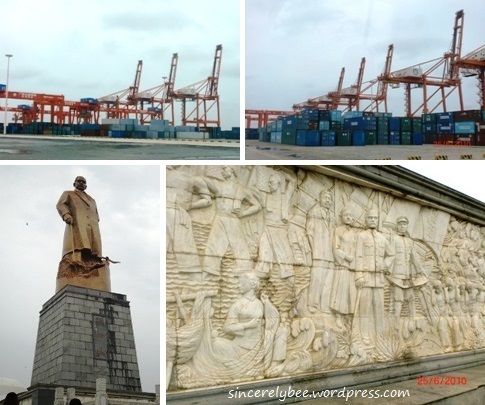 From there we left for Beihai city, also 1.5 hour’s journey. We arrived by 7pm and checked into Shangri-La Hotel (RMB690 a night). We met with municipal leaders, and after dinner, visited the Pearl Palace.

View from Shangri-La Hotel, Beihai, on a rainy day.

On our third day, we checked out the Beihai Export Processing Zone and the Silver Beach. It was unfortunately a rainy day so we only had a passing glimpse of the seaside and beach, said to be one of the finest in the country.

And with that we left for Beihai Airport bound for Guilin.