BACK IN MALACCA for a few days this week, hubby rummaged through his childhood stuff and found some “treasures” – hidden away but certainly not forgotten. They were, after all, proof of his younger, slimmer, athletic days – one upon a time 🙂 Majority were for swimming, a handful for discus and shot put. Each trophy holds special memories, some more than the others. 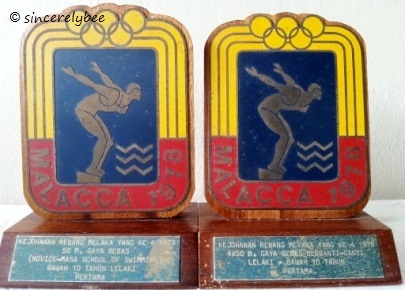 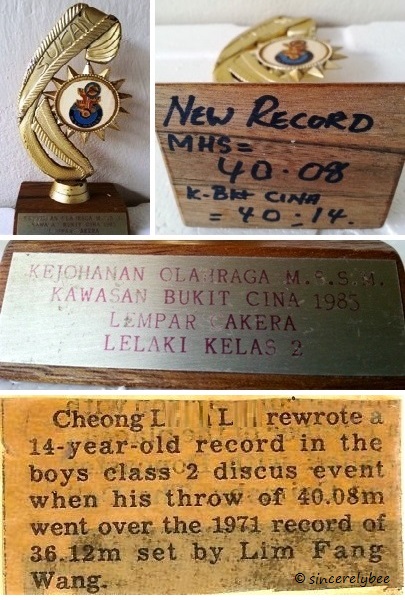 This simple-looking trophy was dear to him because he won it breaking a 14-year old record for discus, at the Kejohanan Olahraga M.S.S.M Kawasan Bukit Cina 1985, Lempar Cekera, Lelaki Kelas 2; an old newspaper cutting of his feat. From there on, he broke the school and state records at subsequent meets.

IN 1992, THE nation got its eighth university. Universiti Malaysia Sarawak (Unimas) was incorporated in December 1992 and had its first intake in 1993. Unimas is located in Kota Samarahan, Kuching.

The Star article, 29 October 1992, page 2… I was there the day Universiti Sarawak Malaysia got its name, announced by the Education Minister on 28 October 1992.

Today there are 20 public universities with at least one in each of the 13 states and Federal Territory of Kuala Lumpur. The country’s premier university is Universiti Malaya, founded in 1905.

UM celebrated its 100th anniversary in 2005. Recently (25 May 2013) we took the girls to the spot their parents stood last century!

AK211 WAS ONE of the courses offered in the Writing Department during my varsity days. It was a course on Filmaking. The group of 12 led by lecturer Kak Anis, made a trip to the island of Langkawi from 23rd to 31st October 1990 for a filming project. I was not part of the course, but became the unofficial 13th member of the group that earned me the nickname “AK211 and a half” member 🙂

A brief stop along the train journey at Tapah, Perak (23 Oct); at the Langkawi International Airport (27 Oct).

After a night’s rest at the cab driver’s home, we were ready to shoot… oooo, check out those legs! (24 Oct)

After filming at Bomoh Haji Hussain’s shop, he dispensed some farewell gifts to us; a group photo with Haji Hussain at his shop. (25 Oct)

The “students” went to sea sea sea, to see what they could see see see… (27 Oct)

At Makam Mahsuri (L) and Telaga Mahsuri (R)… legend has it that Mahsuri cursed Langkawi for 7 generations for her wrongful execution. The number “7” works just fine for us, we got married seven years after this photo was taken 🙂 Perhaps he threw a coin into the well and made a wish that came true! (27 Oct)

(Top, L-R) A visit to Kedah Marble Factory (28 Oct); and the next day, took a boat to the quarry at Pulau Dayang Bunting (29 Oct); (Bottom) All geared up before going to the quarry.

That night we spent time at Pelangi Beach Resort and enjoyed Pantai Cenang the next day before ending our trip.

THIS IS A true story of three people brought together by fate; a friendship forged first in Malaysia, then Macau and years later, reunited all the way in the United States. This real life experience has sealed my belief in FATE.

I was in UM when I first met Racha, a Thai national. My college had in 1990 organised “The Second Asia-Pacific Conference – Youths for Peace” (link). I was a member of the organising committee and Racha came as one of the two delegates representing Thailand (he was then a political science student of Chulalongkorn University, Bangkok). As part of their visit, we took the delegation for a city tour and I was assigned as Thai delegates’ liaison officer. My friendship with Racha was cemented that day. After the week-long conference, we kept in contact through letters.

The following year in 1991, my coursemate AC went to Macau for a month-long summer course in Portugese language and culture. There he met a Thai student named Racha doing the same course. Lo and behold, they both learnt they had a mutual friend in me. 🙂

The friendships amongst the three of us continued after we graduated. While I found a career in journalism, both AC and Racha ended up in the foreign service of their respective countries. We continue to keep in touch through snail mail and subsequently emails.

When I was doing my postgraduate studies in the United Kingdom, AC got his first posting to the US capital in 1996. Fate had it that after completing my MA, I would end up with an “MRS” and join him there as his spouse in 1997.

Fate struck again in August 1998. AC (now hubby) and I went to Boston (link) to visit a mutual friend FF who had just completed her postgraduate studies. We arrived on the morning of 7th August and after parking our belongings, we tagged along FF to Boston University and sightsee after that around the neighbourhood. While sightseeing, lo and behold, we bumped into Racha on the street! The clichéd remark “It’s a small world” never rang louder and truer than that fated day!

And fate evidently struck at the right time too. Racha had just arrived in Boston and was looking for a place to stay for the duration of his doctoral studies.  Incidentally, FF who was scheduled to leave Boston at the end of that month, had her old room up for rent, which Racha eventually took up!

In a 2003 email, Racha recalled that it was such a “co-incidence” that he first met me in Malaysia, and AC in Macau, and then both of us on a street in Boston, USA!

Other than fate, Racha and us share some similarities. He too married a college-mate in 2002 and the following year, his wife gave up her banking job to join him in the US, and that both our families are now nomads-of-sort. We’ve since moved from DC to Moscow and Hong Kong; and Racha from Boston to Colombo and Melbourne.

I look forward to the day our paths with Racha to cross again. Who knows, we might be fated to serve in the same country one day!

I first befriended Racha in 1990 in UM, Kuala Lumpur; in1991, AC and Racha got acquainted in Macau.

(L) In August 1998, fate reunited us when we bumped into Racha on the street in Boston; (R) In May 2000 he came to visit us in DC with his brother Rachata.

NO, IT’S NOT a student demonstration protest/cry for peace! It was a varsity project I was involved in, more than 20 years ago.

UM’s Za’ba College had in June 1990 organised the “Youths for Peace – The Second Asia-Pacific (APC)”. It was modelled after the United Nations’ General Assembly, and a follow up to the inaugural Asia-Pacific Conference held in August 1988 (which was the “first of its kind organised by an institution of higher learning in Malaysia”).

The 2nd APC enabled “undergraduates of the Asia-Pacific region to exchange thoughts and ideas and thus bring the message of peace and global understanding to the leaders of tomorrow” (according to the program book which I keep till this day!). The week-long conference from 3rd to 10th June saw the participation of undergraduates from 23 countries.

I was a member of the organising committee. As the Manager of Souvenirs, I was tasked to find advertisers for the program book as well as sourced and dealt with the suppliers of souvenirs.

The conference began on 4th June with the opening ceremony and keynote address “The Role of University Students in the Mission of International Peace” by HRH Raja Nazrin Shah, the Regent of Perak and Pro-Chancellor of UM. It concluded on 7th June with the presentation, debate and adoption of the Joint Resolutions, and a closing ceremony on 8th June by Vice-Chancellor Prof. Dr. Syed Hussein Alatas at the Park Royal Hotel.

Day trip to the National Monument, KL (3 Jun 1990); with Marina from Cambodia; and Thai delegates Bukhare and Racha, I was their liaison officer.

The organising committee members in a group photo at the closing ceremony in Park Royal Hotel (8 Jun 1990); bidding farewell to some of the delegates (10 Jun 1990).

Pieces of memories from the project – the logo and a page of the program booklet.

Three things stood out after all these years…

One: I was unfortunately the person responsible for the uniforms which made us all look like Bank Simpanan Nasional staff! Yes, do take another look at the group photo above.

Two: Wee Li (the Director of Delegates) would not let me forget the “Full page advertisement Page 33”.

Three: During this conference, I made a good friend in Thai delegate Racha who later befriended hubby on a separate occasion in Macau. A few years later, hubby and I literally bumped into Racha on the streets in Boston, US (link). The friendship among the three of us is one classic tale of FATE (link), and we are still in touch till this day. (Incidentally, when we left for Moscow in 2005, the Brunei delegate who was working in KL at that time, turned up at the hotel to bid us farewell!).